Serrekundading is a village located East of Brikama. Caravan of Mercy has been supporting the Serrekundading public through its Madrasah since it was established in 2008. Sadly this Madrasah has since collapsed. 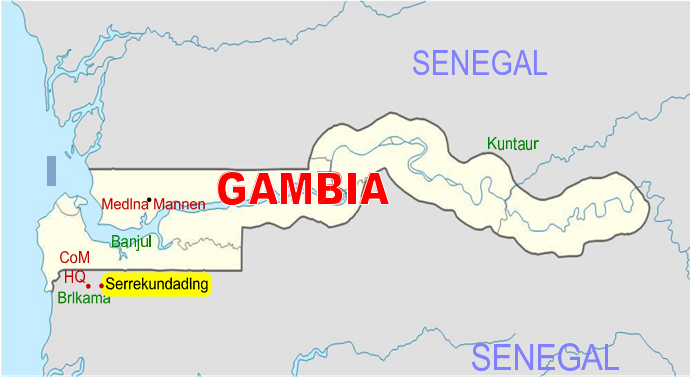 The Madrasah once housed 200 students from Serrekundading and surrounding villages and was the only one of its kind in the area.

During the annual rain season in 2013, the region experienced such torrential rain falls that utterly destroyed the Madrasah.

The Madrasah was made up of two classrooms, one office and a store-room, all financed and constructed by the locals with mud bricks. The roofing and doors were provided by Caravan of Mercy

The ages of the children taught there ranged from 7 to 15 years. They were tutored by 4 teachers who taught them Quran and Islamic subjects as well as English language, mathematics, science and social and environmental studies.

The locals are now desperate to have a new stronger building erected to fulfil their basic religious needs. A building that can withstand both the heat and heavy down-pours of rain.

Caravan of Mercy are therefore seeking donations in order to help the Gambians in Serrekundading.

The Prophet Muhammad (peace be upon him) said: “The believer’s shade on the Day of Resurrection will be his charity” [Tirmidhi]

The proposed Madrasah building is estimated to cost  £20,000

Photo blogs
We use cookies on our website to give you the most relevant experience by remembering your preferences and repeat visits. By clicking “Accept All”, you consent to the use of ALL the cookies. However, you may visit "Cookie Settings" to provide a controlled consent.
Cookie SettingsAccept All
Manage consent

This website uses cookies to improve your experience while you navigate through the website. Out of these cookies, the cookies that are categorized as necessary are stored on your browser as they are essential for the working of basic functionalities of the website. We also use third-party cookies that help us analyze and understand how you use this website. These cookies will be stored in your browser only with your consent. You also have the option to opt-out of these cookies. But opting out of some of these cookies may have an effect on your browsing experience.
Necessary Always Enabled
Necessary cookies are absolutely essential for the website to function properly. This category only includes cookies that ensures basic functionalities and security features of the website. These cookies do not store any personal information.
Non-necessary
Any cookies that may not be particularly necessary for the website to function and is used specifically to collect user personal data via analytics, ads, other embedded contents are termed as non-necessary cookies. It is mandatory to procure user consent prior to running these cookies on your website.
SAVE & ACCEPT