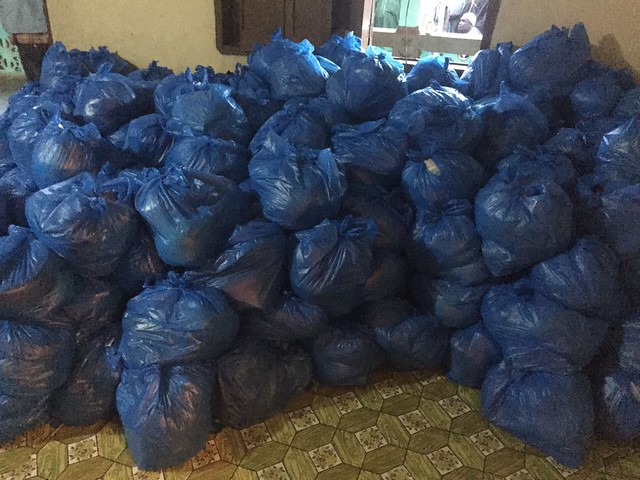 Couldn’t sleep, as the Mosquitos were having a field day. It rained heavily all night and morning and we wanted to leave early to prepare for a distribution in Tenne, Bo waterside and Lombacor, but due to the roads it was difficult. The area is in Tawor, grand cape mount province, the people of all these 3 areas will be coming to the area off bo waterside and we will distribute to the people there. We went to an Internet cafe to try to do the e visa but the connection was too poor. We made our way to the wholesalers to help load up the truck which was making its way to grand Cape Mount County. We arrived in Bo waterside at approximately 5pm, but the truck was running late. We sat down with the locals and made mashwarah that we should do the distribution after fajr as we had to make the parcels during the night, after taraweeh salah. The truck arrived just before Iftar and after offloading the truck, it was approximately Eisha time. We prayed Eisha and taraweeh salah and then started to pack the parcels and we finished at about 3:00am.

Photo blogs
We use cookies on our website to give you the most relevant experience by remembering your preferences and repeat visits. By clicking “Accept All”, you consent to the use of ALL the cookies. However, you may visit "Cookie Settings" to provide a controlled consent.
Cookie SettingsAccept All
Manage consent

This website uses cookies to improve your experience while you navigate through the website. Out of these cookies, the cookies that are categorized as necessary are stored on your browser as they are essential for the working of basic functionalities of the website. We also use third-party cookies that help us analyze and understand how you use this website. These cookies will be stored in your browser only with your consent. You also have the option to opt-out of these cookies. But opting out of some of these cookies may have an effect on your browsing experience.
Necessary Always Enabled
Necessary cookies are absolutely essential for the website to function properly. This category only includes cookies that ensures basic functionalities and security features of the website. These cookies do not store any personal information.
Non-necessary
Any cookies that may not be particularly necessary for the website to function and is used specifically to collect user personal data via analytics, ads, other embedded contents are termed as non-necessary cookies. It is mandatory to procure user consent prior to running these cookies on your website.
SAVE & ACCEPT