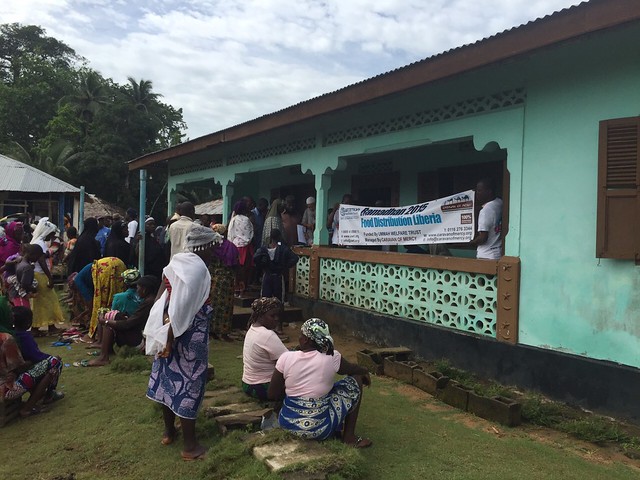 We slept for an hour and got up for suhoor, prayed fajr and began distributing. We had over 400 Iftar food parcels to distribute in this area. People from Tenne and Bo waterside all arrived after Fajr to collect their food parcels. The list of those receiving parcels was made by the locals and our volunteers, to ensure that the most needy received the food parcels. The parcels had similar contents to the ones distributed in Barnesville. In this area we distributed over 600 food parcels and again it was the first time any UK charity has done a distribution of this kind in this area. The people were very happy to see us and were looking forward to their food parcels. We had people from two areas Tenne and Bo waterside to come to one distribution point. The atmosphere was electric.
Besides distrusting Iftar food parcels, we gathered all the children together and gave out a pack of biscuit to each child. As soon they saw us with the biscuits they all cheered loudly in joy, which was extremely pleasing. We finished distributing all the parcels at about 3pm.

Photo blogs
We use cookies on our website to give you the most relevant experience by remembering your preferences and repeat visits. By clicking “Accept”, you consent to the use of ALL the cookies.
Cookie settingsACCEPT
Manage consent

Any cookies that may not be particularly necessary for the website to function and is used specifically to collect user personal data via analytics, ads, other embedded contents are termed as non-necessary cookies. It is mandatory to procure user consent prior to running these cookies on your website.